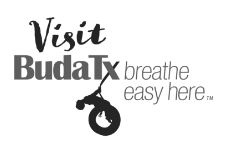 Apply to Film in Buda!

This means Buda, Texas is ready to go and welcomes the film community.

Before filming Buda, the Application for Commercial filming must be submitted by the production company and then approved by City staff within the following time frame in order to receive your film permit. You must have a permit to film in the City of Buda.

All film projects in Buda must pay a one-time $50.00 application fee regardless of whether the filming locations are public or private property.

If filming on  City/public property a site plan must be provided. A traffic plan may be required as well.

Fees for the use of Police/Fire/Public Works personnel or the use of City equipment will be established on a case-by-case basis.

If you are interested in filming in Buda, please fill out our filming application to ensure that your filming goes smoothly. Parks and city facilities must be reserved in advance and all notice of filming is to be submitted to the City Manager's Office. For more information, please contact the Department of Tourism.
Find a Hotel
events
OUTDOOR SPACE
hISTORIC DOWNTOWN
Government Websites by CivicPlus®
[]